There are not many names that have gone down in footballing history, names known throughout the world, but one of those names is undoubtedly legendary Brazilian attacking midfielder, Ronaldinho, or Ronaldo de Assis Moreira as he was born.

Entering the world in March 1980, into a family of professional footballers, he was destined for footballing greatness from the moment he took his first breath, and his career certainly didn’t disappoint. With both his father and older brother being professional players themselves, he poured his childhood hours into the sport, and started playing organised football at the tender age of 7, on makeshift football courts.

It was during this time that Ronaldo became known as Ronaldinho (little Ronaldo) because he was such a tiny child – but that never stopped him from becoming the biggest player in the world. At the age of 13, Ronaldinho cemented his future as one of the greats when he scored a ludicrous 23 goals in just one match, and as his success continued, he was spotted and called to play for the National under 17 team for the World Championships in Egypt. Not only did Brazil win, but Ronaldinho was named as the tournament’s best player. The dream had begun. 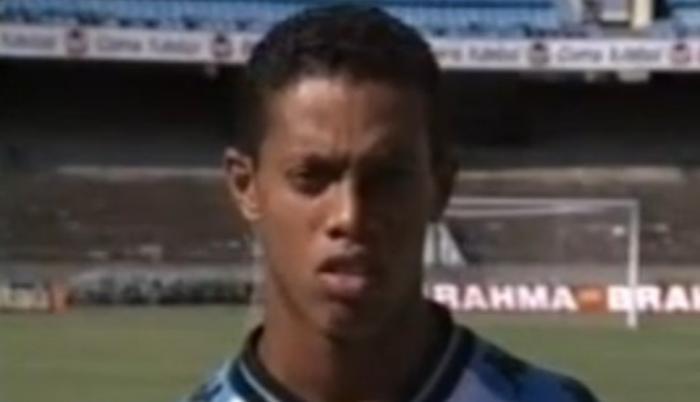 In 1998, after his national success, he was signed by the Brazilian team Gremio, where he made his senior debut in the Copa Libertadores Tournament. During the first season he made his mark scoring 23 goals in 48 matches, and most notably in a match-winning moment, Ronaldinho flicked the ball over the head of the Brazil’s National World Cup legend, Dunga, scoring a goal and brought his team to victory in the Rio Grande do Sul State Championship Final. Furthermore, with Gremio, he also won the inaugural Copa Sul-Minas. And so the stage was set for the start of his international career…

After an unsuccessful bid from Arsenal, Ronaldinho finally managed to make his European debut when he signed for French team, Paris Saint-Germain, in 2001. Despite getting off to a slow start, often being kept on the bench or used as an opener or substitute, he finally proved himself in a game against Lyon, where he scored in the 79th minute, just 10 minutes after he walked on the pitch, he then started to come into his own, scoring goals in 4 consecutive matches, and he became a Parisian favourite. With his growing confidence, he helped his team reach the semi-finals of the 2001-2002 Coupe de la Ligue, losing out to Bordeaux.

In the 2002-2003 season, Ronaldinho bagged his esteemed no. 10 jersey, and although he didn’t make quite as much of an impact, he still played well. He was still a top scorer within the club, and was well known for some serious skills – famously running half the length of the pitch before flicking the ball over the keeper’s head.

He returned for the 2002-2003 Coupe de la Ligue, where this time he was instrumental in defeating Bordeaux and leading them to into the final, and this is where he received his first standing ovation by Parisian supporters. However, despite his form, the club failed to qualify for any European competition, and dissatisfaction ate away at Ronaldinho who wanted a larger stage, and the fate of this alliance was sealed. 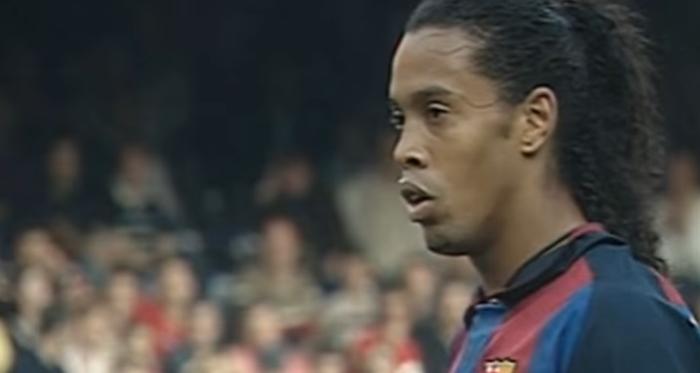 After a bidding war with Manchester United, Barcelona managed to secure Ronaldinho for €30m, and proving his worth, he made his mark on his debut by scoring against Milan. However, early in the season Ronaldinho was out with an injury, seeing Barcelona fall to a lowly 12th position in the league – but on his return later in the season, he brought them back up to a remarkable 2nd place finish.

In the 2004-2005 season, after winning his first league title with Barca, he was quickly named as FIFA World Player of the Year. Because of his outstanding form, Barcelona were keen to extend his contract from 2008-2014, which would have seen him net £85m over 9 years, but he turned it down and signed just a 2-year extension which included a clause that would release him should a club bid £85m or more for him.

Ronaldinho again proved himself against Real Madrid in the first leg of el Clasico after getting 2 of the 3 winning goals, which saw him heaped with praise from both Barcelona and Madrid fans alike. This was a defining moment for Ronaldinho, due the rarity of being given such praise from opposition fans.

This season definitely went down in Ronaldinho’s history books as one of his best, as he steered Barcelona to their first Champions League win in 14 years, as well as taking them to the top of La Liga, giving him his first double.  With 26 goals to his name, he was shortlisted for the Laureus World Sportsman of the Year and selected in FIFA World XI.

Ronaldinho opened his 2006 season with an overhead bicycle kick goal, the one he’d dreamt of since childhood, and helped Barcelona to the final of the Club World Cup, where he would receive the Bronze Ball Award; he was also named 3rd in FIFA’s World Player of the Year.

However, despite a record 21 league goals, they missed out on top spot in La Liga to Real Madrid. Unfortunately, this marked a downturn in his Barcelona career, as in 2007-2008 Ronaldinho was in and out of action with injuries, and his season ended in April with a torn muscle. This seemed to lead to a lack of dedication and commitment, and it was believed amongst players and fans that he was past his best. The team wanted him out.

With the Barcelona dream behind him, Ronaldinho needed a fresh start, and he got this with a contract from Italian super club Milan. His season got off to a good start with some impressive goals but he finished his season with only 10 goals from 32 appearances for the club, because despite a decent start, by the end of the season he struggled with fitness and was often played from the bench. This decline was blamed by his love of partying, not a lack of talent.

His 2009 season started as his 2008 ended – disappointing. However, he soon rediscovered form and became one of their top players that season, scoring against Juventus, Siena, and landing his first hat-trick. Although he was the lead assister in goals that season, his reputation suffered due to missing 3 crucial penalties. This saw an end to Ronaldinho’s European career, and saw him return to his native South America.

Despite many false reports of his next destination, he signed for Flamengo, and scored his first goal on his debut game for the club. He helped them to victory in the Taca Guanabara as well as the Taca Rio. He also scored another hat-trick later in the season. Unfortunately, this glory was short lived, as things turned sour when he sued the club for lack of payment and thus cancelled his contract. He was back on the market… 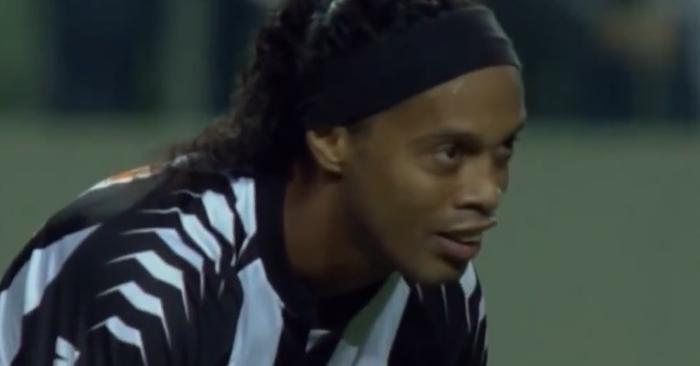 Hoping to get his career back on track, he signed a 6-month contract with Atletico Mineiro in June 2012.  Despite not giving a remarkable performance, he lead them to some good results, coming 2nd in the 2012 Brasileirao, and qualifying for the 2013 Copa Libertadores. He was also selected as the best player in the league, winning the Bola de Ouro award.

The following season he helped them win the Campeonato Mineiro, and led them to victory in the Copa Libertadores, and this apparent return to form saw him named as 2013 South American Player of the Year. As a result of this success, he renewed his contract and lead them to yet another victory in 2014 Recopa Sudamericana before he finally canceled his contract with the club not long after..

After departing Atletico Mineiro, Ronaldinho joined Mexican Club, Queratero, on a 2-year contract. Despite missing a penalty on a very questionable debut, he redeemed himself on his next game, by both assisting and scoring, and it was during this season Ronaldinho earned another standing ovation from opposition fans.

As a result of his goals, Queratero won classification to the Liga MX playoffs, where they got to the semis. However, despite a decent season, the best he had had for a while, he announced his departure from the club in 2015 with a heartfelt and tearful speech.

After a successful stint in Mexico, Ronaldinho had a disappointing return home to Brazil, when he signed for Fluminense, in July 2015. This appointment was very short-lived, and after 2 months and 9 appearances, the team and fans were underwhelmed by his mediocrity, and the contract was terminated by mutual consent. This was to mark the end of Ronaldinho’s long club career, which started with a bang, but sadly ended with a whimper.

Ronaldinho after having retired

After his games for Fluminense, Ronaldinho is focusing on enjoying his life. He is visiting new places and doing things he loves apart from playing football. One of his main interests seems to be casinos. Some months after finishing his career, Gaucho has been filmed in Hotel Casino Westgate in Las Vegas.

It remains to be seen what Ronaldinho’s next career step will be. We think that he is the right candidate for doing commercials for casinos online. Just as Neymar and Ronaldo, he could be an excellent brand ambassador for those of the largest casino sites that are focusing on fair gambling.

No matter what our favorite football player will do in the future, you can count on us following his life after having retired. We will keep you updated on all the latest information about this amazing man!

He played in his national team in the 2002 World Cup where scored the goal that knocked England out in the quarter finals and celebrated victory after their 2-0 defeat of Germany in the World Cup Final.

However, his next national appearance was as part of the Confederations Cup squad in 2005, which saw him leave the tournament goalless, and this was followed swiftly by the 2006 World Cup, which turned out to be his worst international performance, seeing them knocked out in the quarter final by France.

This led to disillusionment from Brazilian nationals, a loss of respect for the player, and as a result he was left out of both the 2010 and 2014 squad. He was also part of the national squad for both the 2000 and 2008 Olympic Team, although again his form was disappointing, and in 2008 he scored just 2 goals, and they left with the bronze medal.

It seems that despite showing such promise in the beginning of his career, he only really excelled on the international stage in the 2002 World Cup – the matches and tournaments that followed never lived up to his club playing reputation, and in the eyes of his fellow countrymen, he fell from grace swiftly.

Ronaldinho has had a host of career highs and career lows, and his professional life has certainly been a rollercoaster. Clearly a player of remarkable natural talent, he has produced some of the most jaw dropping goals in international football, but injury, despondency and a lack of true motivation later in his career saw a sad decline.

However, as a tribute to his former glory days in Barcelona, in the beginning of 2017 he was signed by the club as their ambassador, where he will now represent them once more on the world wide stage. One thing’s for sure, he will always go down as one of the truly great players in international footballing history, and his name will live on.